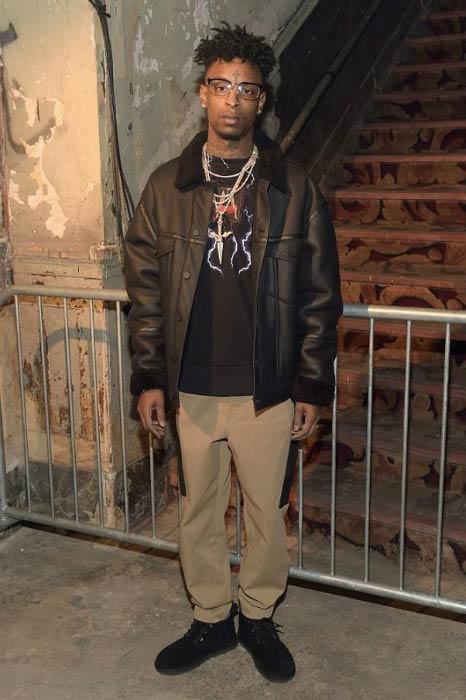 Education
21 Savage went to the Stone Mountain Middle School. However, he was expelled in 7th grade after he brought a gun to the school. Due to the gun offense and another incident, in which he was caught with a girl on the school bus, he was expelled from all Dekalb County schools.
He was also enrolled at the South Gwinnett High School.
Occupation
Rapper, songwriter and record producer

21 Savage poses for a modeling photoshoot in 2016
Brand Endorsements
21 Savage hasn’t done endorsement work for any brand.
Religion
He practices Ifá, which is also known as Yoruba religion.
This religion is predominantly followed by Yoruba community of Nigeria.
Best Known For
The success of his second extended play, Savage Mode.
Having collaborated with popular artists such as Drake, Gucci Mane, and Lil Yachty.
As a Singer
In July 2015, 21 Savage dropped his debut extended play, Free Guwop. While, his debut mixtape, The Slaughter Tape, was released in May 2015 on iTunes.
First Film
21 Savage hasn’t made an appearance in a theatrical film yet.
First TV Show
In 2016, he made his TV show debut in an episode of the talk show, Verified.
Personal Trainer
21 Savage’s workout routine and diet plan aren’t available.
21 Savage Favorite Things
Role Model – Gucci Mane
Source – Capital Xtra

21 Savage poses for a photoshoot for The Fader magazine in 2017
21 Savage Facts
Once, he had taken a gun to school in 7th grade because a group of students had threatened to beat him.
In 2013, on the eve of his 21st birthday, he was shot 6 times. He nearly died due to blood loss as one of the bullets hit him in the neck. His best friend got killed during the shooting.
While in school, he got involved in a lot of illegal activities. He used to sell weed and crack and also used to be a part of robberies.
His debut extended play, Free Guwop, was his tribute to Gucci Mane.
Some member of his crew, The Slaughter Gang, have got number 21 tattooed on their bodies. The number 21 refers to the block 21 Savage and some of his crew members grew up in.
At the end of 2016, he got involved in a feud with rapper Tyga after he had expressed his love for Tyga’s then-girlfriend and social media star, Kylie Jenner.
Savage has got a tattoo of dagger right between his eyes to honor the memory of his dead younger brother, Quantivayus. Quantivayus had got a similar tattoo done.
Savage doesn’t like flying around. He is always afraid that the airplane might get hijacked.
While growing up, he was expelled from a number of schools. He was eventually placed in juvenile detention.
He had used only a microphone and Macbook to make his debut mixtape, The Slaughter Tape.
In 2016, the prestigious hip-hop magazine XXL included him in the Freshman Class of 2016. The other names on the list included Desiigner, Lil Uzi Vert, Lil Yachty, and Lil Dicky.
In October 2016, he was handed 10 days community service, in which he had to wash police cars and cut community grass after he was caught driving without a license for the third time.
Savage loves guns. He first saw the gun, which was a .38 revolver, when he was 8 years old. It was shown by his uncle, who then taught him the uses and dangers of a firearm.
In 2014, the Atlanta Police Department recovered marijuana, two firearms and an unlabeled bottle of opioid hydrocodone from the car Savage was traveling in as a passenger.
He has got the name of his mother tattooed on his stomach. He has also got Jason and Freddy inked amongst clouds on his chest. Both of them were his best friends and were killed in a shootout.
Visit his official website @ 21savage.com.
Meet him on Facebook, Twitter, Instagram, YouTube, Tumblr, iTunes, and Soundcloud.