And now, the end is near. Arsene Wenger certainly did it his way at Arsenal, but his reign at the club is drawing to a close.

The Frenchman caught the footballing world by surprise on Friday by announcing he will leave the Gunners at the end of the season, ending his 22-year tenure.

During over two decades in charge, Wenger has won the Premier League three times and lifted the FA Cup on seven occasions.

However, it hasn’t always been plain sailing during his time in England. There have been near misses, painful departures and disappointing defeats.

Here, we recall five moments Wenger would probably like to forget (and that is without even mentioning his shoving match with Jose Mourinho in 2014).

THE END OF THE INVINCIBLES

Arsenal’s Invincibles were unbeaten in the Premier League since May 2003 when they turned up at Old Trafford on October 24, 2004. However, after 49 games, the run came to an end in controversial circumstances.

Manchester United broke the deadlock when Ruud van Nistelrooy converted a contentious penalty awarded in the 73rd minute for a foul by Sol Campbell on Wayne Rooney, who later scored his side’s second goal on his 19th birthday to wrap up a 2-0 win.

The final whistle saw the end of the action on the pitch, only for the bad blood to continue in the tunnel. There was no swapping of shirts and Campbell refused to shake Rooney’s hand, despite the pair being team-mates with England.

Wenger reportedly confronted Van Nistelrooy before rival manager Alex Ferguson became involved, leading to what the media dubbed as “The Battle of the Buffet”. Food was thrown in the direction of the United boss, who was forced to change before undertaking his post-match interviews.

While he led Arsenal to glory domestically, Wenger has never quite managed to conquer Europe during his long time at the helm of the Gunners, although he may still bow out with Europa League success.

The closest they came to winning the Champions League was in the 2005-2006 season, as they knocked out Real Madrid, Juventus and Villarreal to set up a showdown with Barcelona in Paris.

Yet Wenger’s men wasted several chances to double their lead, allowing Barcelona to rally in the closing stages. Eto’o levelled the game before Juliano Belletti grabbed the winner with 10 minutes remaining, beating replacement keeper Manuel Almunia at the near post. 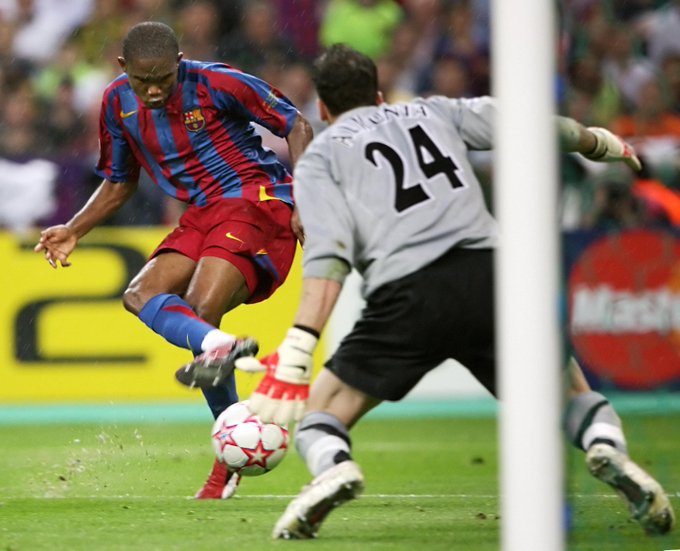 86 – Arsene Wenger has won the most Champions League matches (86 – excluding qualifiers) without having ever won the competition. Frustration.